This litter contains four kittens and they are born 24:th of April 2006. All the kittens have as usual been named after songs from the Eurovision Song Contest (links behind the title). This time we have chosen danish contributions as the theme for the litter. The blue colourpoint boy is named "Twist Of Love" [Denmark 2006]. The seal bicolourtabby boy is named "Disco Tango" [Denmark 1979]. One of the girls is named "Fly On Wings Of Love" [Denmark 2000]. (The original song title is "Fly On The Wings Of Love", but that was too many letters for the pedigree.) The other girl is named "Angelique" [Denmark 1961], with the extension "of Chorotegas" since she is sold to Ulla Ekdahl (S*Chorotegas). Both the girls are seal colourpoints. 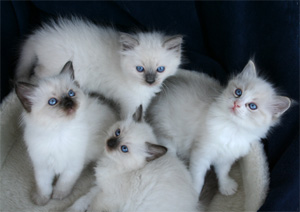 The whole litter together 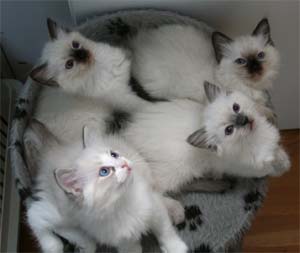 Ragnar is an import from Holland. Thank You Christine (S*Krickelins) for letting us borrow him. 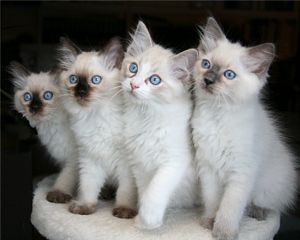 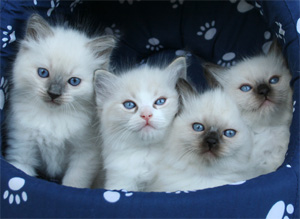