The history of the ragdollcat

The first ragdollbreeder was Mrs Ann Baker in California. Her neighbour had a white persian Angora, Josephine, and Mrs Ann Baker was eager to have this female cat mated with a sacred birma, to be able to keep the offspring. This offspring together with a burmese outcrossing was the foundation of the breed.

But Mrs Ann Baker started to spread weird rumours about her cats, for example that they couldn´t feel any pain, which is not true at all! That´s why ragdollbreeders broke with Mrs Ann Baker.

Another famous ragdollbreeder, Mr Denny Dayton, started to develope the breed, and in the year of 1969 he maneged to have the breed accepted and legitimated by Cat Fanciers standards. The first ragdoll, "Suchfun Misty Knight", was imported to Sweden in 1991. 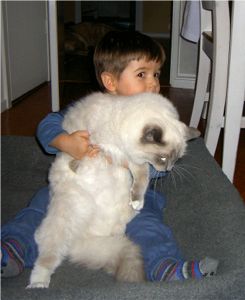 The temperament of ragdoll

At first you must know that every ragdoll is an individual and it has its own personality. Which means that not all ragdolls have the same temper, but a ragdoll usually is a very calm and tolerant cat, especially at home. These qualities and their tendency to go limp when they are hold is probably reasons for why they are so popular. The fact that the ragdoll is so relaxed make them splendid as a familycat, but you must make your children understand that a ragdoll is not a toy! The ragdoll is also very social and they love to have company. Therefore you should have two ragdolls if you work a lot. They are also marvelous companions to other pets. 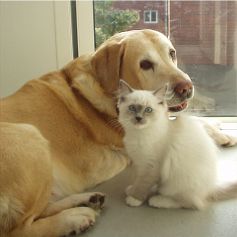 A free short description of the ragdollstandard

The ragdoll is a massive, large cat with a medium to strong boned muscular body. There are three different varieties, colourpoint, mitted and bicolour (agouti or non-agouti) - and 20 colourvareties - altogether 60 varieties

The head is medium sized with a broad modified wedge. Slightly rounded forehead (not domed) showing a gentle transition to a flat plane between the ears. Good height in profile.There should be a slight curve in the upper third of the straight nose.

The chin and the nose as well as the cheeks must be well devoloped. The ears are medium and wide set and tilt slightly forward. The eyes are big, oval and blue, the darker the better.

The coat of the ragdoll is long but not as long as the coat of persians. The coat is soft, dense and feels like cold silk to touch. So the coat is ratherrabbitlike and does not tend to mat, therefore these cats don´t need excessive grooming.

The ragdoll is a pointed cat, so they have contrasts of colour between different parts of their body. The tail, face, ears, and legs are darker than the rest of the body. All three varieties are pointed, but the colourpointed cat is not allowed to have any white markings in difference of the mitted and bicolourvarieties.

About the bicolour variety, the lower part of the body is white while the upper part maintains the colourpoint pattern. On a bicolourcat the cat´s face has a large V-shaped patch. This variety is unique for the ragdoll since the 03-patterns is little more specific for ragdolls compared for other breeds. For exemple faults for ragdollbicolourpattern is white on ears ans white on the tail.